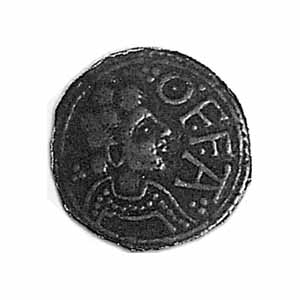 Offa, king of the Mercians (757 ? 96), son of Thingfrith the son of Eanwulf, was first cousin to Ćthelbald 4, king of the Mercians (716 ? 757). Offa 7 became king of the Mercians after driving out Ćthelbald 4?s short-lived successor, Beornred 1. By the end of his reign Offa 7 was the most powerful king in England and, to varying extents, exercised lordship over Sussex, Kent, Essex and East Anglia, although it is unlikely that he exercised any direct lordship over Wessex or Northumbria. His reign has come to be viewed as a period of significant military and urban development in the face of Viking depredations.